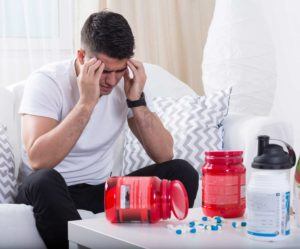 I had a young man yesterday who had undergone two previous treatments for gynecomastia with surgery and continued to have fullness of his chest with puffy nipples. He was without a doubt a bodybuilder with a big, strong muscular frame and his case made me think about all the men who develop Gynecomastia from steroids. He was a perfectly nice guy from out of town who had come to the Austin Gynecomastia Center for surgical treatment after I reviewed his Online Consultation.

When I saw him, his chest was full in the nipple-areola complex area, but it didn’t look like too much. Boy was I wrong; I had been essentially looking only at the top of the mountain. During a gynecomastia surgery in Austin, I struggled to remove the tissue that was sticking to the surrounding skin and underlying muscle and I couldn’t use the VASER™ technique because of the tissue’s super firm nature. Instead, I used the “old fashioned” subcutaneous mastectomy method of removing the tissue as a whole. It was stuck and bloody and required careful dissection through the small incision at the areola border. 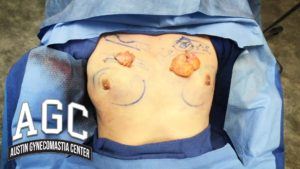 Gynecomastia from steroids is different from the most common variety caused by leftover tissue from puberty. It’s firmer, has a much higher ratio of glandular tissue and often is quite adherent or “stuck” to the surrounding tissues, much like dealing with a rock in a pillow. My patient had previously had two unsuccessful gynecomastia treatments: the first time, they tried to use liposuction alone (not a good plan) and the second time they tried to remove tissue, but had obviously been overwhelmed (lacking experience needed to discern what to take and what to leave). This reflects the basics and the art of gynecomastia treatment.

Even though the gynecomastia may look “smaller” than others, Gynecomastia from steroids or hormone-induced gynecomastia is distinctly more challenging and requires more expertise and effort. In addition, there is usually less room for error, as these patients often have very little body fat to work with. 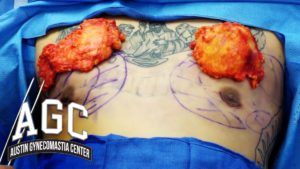 Hormone-induced gynecomastia should be approached with caution, and an experienced Austin gynecomastia surgeon is necessary to achieve the best result, once and for all.

Who do you trust with your gynecomastia treatment?