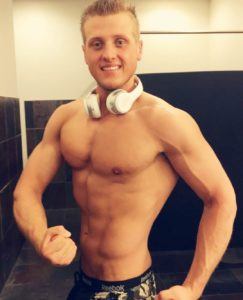 This young man previously had his gynecomastia surgery elsewhere. He reached out to me, complaining of continued fullness and what he thought were unusual scars located on both sides of his chest. I Skyped with him on several occasions to discuss my findings and to make a recommendation for his full recovery from gynecomastia. To his disappointment, I confirmed that the surgical approach was indeed unusual and that I could see the persistent fullness. Due to his previous experience with unsuccessful treatment, there was certainly a trust deficit that we needed to overcome.

I knew I could improve the results but I certainly couldn’t make the scars beneath his nipple-areola complexes disappear. Scars typically should begin to fade over the course of two years but they would always be present. Although he was anxious, I told him nothing but the truth, that things could be improved but there is no way I could guarantee his own happiness, which is true for all patients. 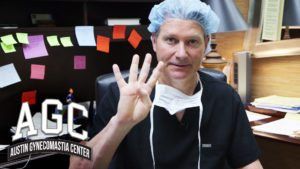 Our worlds crossed and I treated his gynecomastia. Using the unusual incisions already on his chest to remove the glandular and scar tissue, I found a great deal of scarring. I used the “internal flaps” of tissue to make the deeper layers as even as possible, eliminating any irregularities.

Six months after his operation, I received an email from him thanking me and showing me his improved physique and his continued recovery from gynecomastia. You can clearly see that he has done a phenomenal job of sculpting his body and that his chest area has healed quite nicely. Even the appearance of the unusual scars on his chest has improved. You can clearly see in his facial expression that he is genuinely happy, his satisfaction with his appearance is high and that his mind has made great progress in recovering his confidence.

To me, this is the ultimate result: a chest that appears normal, without irregularities, and a mind that overcomes mental scars caused by gynecomastia.

I’m grateful for this patient who was willing to share his positive experience with me. Oftentimes, I hear more about the issues patients are having than I do the positive impact that we later make on their lives. I share this story so that you can see the potential for happiness that exists when you can escape the grip of gynecomastia.